The Cultural Resources Department, in partnership with the Yurok Elders Wisdom Preservation Project, is proud to announce that we have scheduled three six week sessions of the Yurok Language Basket Class to be held on the Rancheria in 2012. UPDATE: The first six week session of the class has been postponed one week. Class is now is scheduled for March 21, 2012 through April 28, 2012. Applications will be accepted until 5pm on Wednesday January 14, 2012. For directions to the classroom, click here. 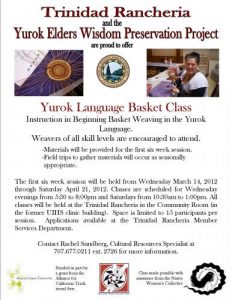 If you have previously submitted an application, you will be contacted to confirm your intent to participate in the current session. To submit a new application, click here.

Preservation of the Yurok, Wiyot, and Tolowa language and cultural traditions is one of the highest priorities for the Trinidad Rancheria. The Rancheria coordinates the annual California Indian Day event and continues to be involved in various community outreach and cultural education demonstrations. Additionally, the tribe supports and participates in traditional cultural ceremonies.

The Trinidad Rancheria Cultural Resources Department is continuing to develop the strategic plan and direction of the department. The Department has begun long term planning for future programs which will include a Community Garden, Yurok Language class, oral history project and a cultural center/ tribal museum. 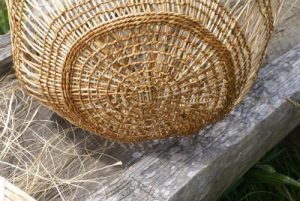 For the past 10 years the Trinidad Rancheria has been dedicated to continuing the traditions of its people and culture.

With the help of grant funds provided by the Northern California Indian Development Council (NCIDC) the tribe hosted a traditional dress making workshop. Members of the tribal community completed two traditional women’s dresses which are now used as part of the tribes’ traditional ceremonies. 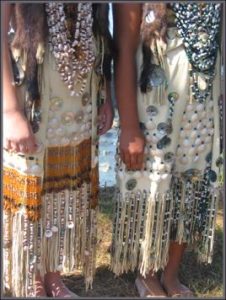 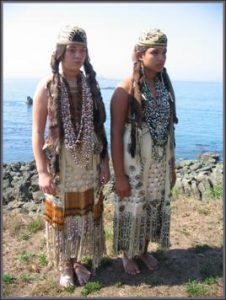 The Rancheria would like to thank Ms. Taylor Silva and Ms. Kayla Maulson for modeling the traditional dresses seen above. All photos were taken September 2008 and are property of the Trinidad Rancheria. Please contact for reprinting permission.

Roads and Land Use